Future climate change will affect both the natural resources and ecosystems of the region and the Dniester Basin as well as their population and economy.

The analysis of a set of regional climate models based on a “moderate” А1B scenario of global greenhouse gas emissions has showed that, compared to 1981-2010, the mean annual maximum and minimum air temperatures are expected to increase by 1.0-1.2°С by mid-century (see the table and the map). At the same time, an increase in the minimum temperature is likely to be larger than the maximum temperature, resulting in the monthly and annual amplitude reduction. Warming is expected to be the greatest in the cold season, especially in winter months. By the mid-21st century, a change in the moisture regime is possible in the Dniester Basin. Although the total annual amount of precipitation will not change significantly (with the selected scenario, its increase and decrease are equally probable), it is possible that it will significantly redistribute between seasons and months. The period without rain is likely to get longer, but the intensity and frequency of heavy precipitation (especially heavy rain) and its uneven distribution throughout the basin will increase. In general, a softer and more humid winter, a hotter and drier summer, a warm and humid September, and a more arid and warmer autumn can be expected in the basin. The analysis of expected changes by mid-century compared to 1971-2000 shows the same trends (see the table), although the quantitative parameters of these changes are somewhat different due to differences in the climatic characteristics of the two basic periods.

Img 1.1 Expected changes in the average climate temperature and precipitation during different periods 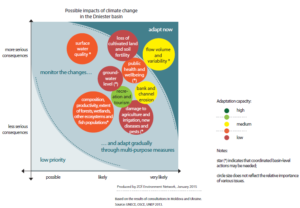 Img 1.2 The ratio of climate change issues in the Dniester basin.