The Dniester Basin extends into territories of 7 oblasts of Ukraine (Lviv, Ivano-Frankivsk, Chernivtsi, Ternopil, Khmelnytskyi, Vinnytsia, and Odessa), covering 13% to 80% of their areas. Within Moldova, the Dniester Basin covers the major part of country’s area (59%), with its 19 districts and Transnistria region drained by the Dniester River, fully or partially. There are 62 towns and 95 townships in the Ukrainian part of the Dniester Basin, and 2 municipalities (Municipias) and 41 towns within the Moldovan part of the Basin, both on the left and right banks of the river. 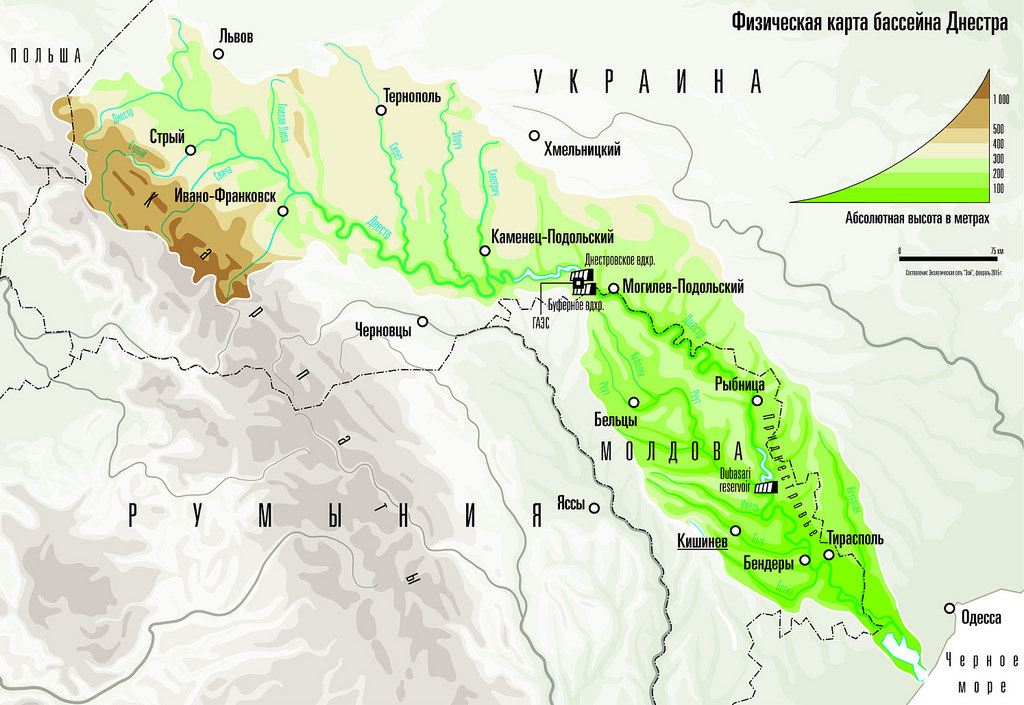 The natural conditions of the territory and the needs of the national economy have contributed to the development of the power, oil and gas, coal, chemical, forest, woodworking and food industries as well as the agricultural production (particularly in the lowland part) in the Dniester Basin.

Within Ukraine, the Dniester Basin sustains a large multi-sectoral economy, comprising heavily polluting industries mainly concentrated in the upper part of the basin (Lviv and Ivano-Frankivsk Oblasts), where the Dniester River collects 70% of its flow.

Moldova’s economy is export-oriented and dependent on imported energy resources. Industrial facilities located along the basin are scarce.  Notwithstanding that, some of the existing enterprises have an impact on the status of the basin, namely a combined heat and power plant in Kuchurgan, a metallurgical plant in Ribnita, cement plants in Ribnita and Rezina, etc.

The Dniester River sustains about 54% of the total water use in the national economy of Moldova.

The Dniester Basin extends over a length of about 700 km, with the average width of about 100 km. The basin itself is shaped like a very elongated oval curved in the middle with extended tail sections. Upper sections account for about 20% of the river basin area. Here it borders on the Prut and Tisza basins in the south, shares the border with the basin of the San, a tributary of the Vistula, in the west and north, and borders on the basins of the Western Bug and the Styr and Horyn rivers, the tributaries of the Pripyat River, in the north.

The Dniester Basin’s hydrographic network is dominated by over 14,000 small rivers, which are up to 10 km long. The lack of large tributaries and the presence of numerous small streams is a characteristic hydrographic feature of the Dniester Basin, which is explained by the “clamped” boundary location of its basin relative to other rivers.

Img. 1.2 The division of the Dniester basin into three parts: the Carpathian, Middle-Podolsk and Lower

Wetland lakes represent an important feature of the river mouth section. The Dniester wetlands play a vital role in maintaining the water balance and conserving the biological diversity in the Dniester River Basin. They provide varied habitats and rich food base for migratory birds, mammals, amphibias, and reptiles. The largest wetland lakes are Putrino Lake (2.2 km2), Tudorovo Lake (2.8 km2), and Beloe Lake (1.3 km2).

The Dniester Estuary (Liman) is a shallow basin formed in the wider part of the Dniester River valley, extending over 42 km.  It has a water surface area of 360 km2 (or 408 km2 if wetland area is taken into account) and capacity of 0.54 km3. The estuary is separated from the sea by a sand bar – Bugaz bay-bar (40 to 500 m wide) and is connected with the sea by a narrow channel – Tsarehrad Mouth.  The Dniester Estuary is the largest freshwater estuary in Ukraine. 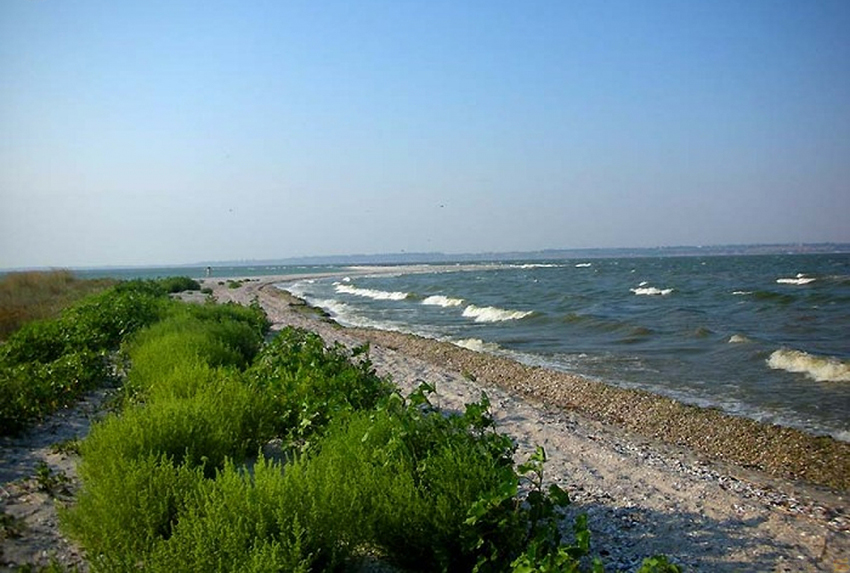 Land Use and Forests

The Dniester Basin area within Moldova is also actively used for agricultural production. Land use in the basin is mainly dominated by arable land, perennial plantations, grassland, and pastures. Within the Moldovan part of the Dniester Basin, 76% of land is used for agriculture, with only 9% being occupied by forests. The largest areas of forests are concentrated around Kodry, where the forest coverage is over 24%. Forests are particularly scarce in the upper section of the Reut River catchment (Balti Steppe) and in southern areas of the left-bank part of the Dniester Basin, where the proportion of forests is below 6%.

The Dniester and Dubasari reservoirs have been constructed in the middle reaches of the Dniester River. The Dniester Reservoir consists of two water reservoirs (the main reservoir and the buffer reservoir) in Chernivtsi, Khmelnytskyi and Vinnytsia Oblasts. The Dniester Reservoir is the “youngest” of large water reservoirs in Ukraine. The reservoir was filled with water during the period from late 1981 to 1987. Its length is 194 m, total area is 142 km2, and full capacity is 3 km3. The 128 km long Dubasari reservoir is located within the borders of Moldova, between Camenca Village and Dubasari Town. It has an area of 67.5 km2 and a full design capacity of 0.49 km³. Both reservoirs were built to ensure the operation of relevant HPPs.

The Dniester has long been widely used in many areas of economic activities: for water transport, water supply, fisheries, recreation. Here, starting from the beginning of the 19th century, modification (straightening) and clearing of the riverbed, deepening of rapids were carried out, which made the Dniester much more convenient for timber rafting and navigation.

The Dniester HPP is the largest industrial development in the basin, producing about 865 million kWh of electricity, mainly during peak hours of the national grid.

Although the mouth section of the Dniester River belonging to Ukraine is relatively small, major water intakes are concentrated there. The Bilhorod-Dnistrovskyi irrigation system water intake is located along the main branch of the Dniester River 1 km downstream of the Moldovan/Ukrainian border.  Further downstream, the river flow is abstracted to supply water to the Dniester Drinking Water Treatment Plant, and to the Mayaki-Bilyaivka and Troitske-Hradenytsi irrigation systems. The Dniester Drinking Water Treatment Plant itself abstracts over 300 million m3 of river water per year at an estimated flow rate of 10 m3/s to provide drinking water to Odessa.

Navigation on the Dniester is very limited,  with a very short section of the Lower Dniester and a section near Mohyliv-Podilsky within Ukraine being navigable. Cargo shipping is carried out along the Dniester reservoir, with ferry sites operating in several locations between the river banks. The Dniester is quite widely used for fishing, with the main fish catch falling on the estuary and the mouth section of the river.

The ecosystem of the Dniester Basin is mainly represented by forest, steppe and meadow landscapes. The greatest variety of terrestrial plant species remains in the Carpathian part of the Dniester Basin. Its tree species pattern is dominated by spruce and mixed forests, as well as deciduous forests followed downstream by broad-leaved and coniferous forests.  These forests mainly consist of oak, beech, hornbeam, and lime-tree. There also occur nut trees, ash trees, and elms.

Steppe vegetation appears further downstream in the basin where it is represented by fescue-feather grass steppes, as well as subpontian-grassland steppes and wormwood-fescue steppes.

Wetland lakes represent an important feature of the river mouth section. The Dniester wetlands play a vital role in maintaining the water balance and conserving the biological diversity in the Dniester River Basin. They provide varied habitats and rich food base for migratory birds, mammals, amphibias, and reptiles. The largest wetland lakes are Putrino Lake (2.2 km2), Tudorovo Lake (2.8 km2), and Beloe Lake (1.3 km2).

Animal habitats in the most part of the Dniester Basin are in biotopes that have undergone anthropogenic transformation – these are mainly agricultural lands. A significant area of the upper basin is captured within a natural biotope – the dark coniferous (spruce-fir) forests of the Ukrainian Carpathians. Alpine meadows and beech forests of the Ukrainian Carpathians are fragmented in the upper reaches of the Carpathian tributaries.